Affectionately referred to as 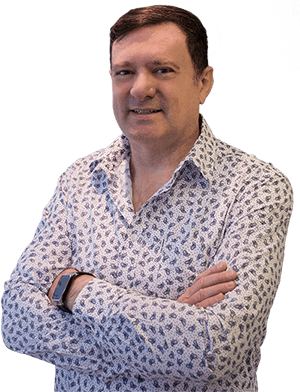 “Dr Rico” by our little patients (Parents too!), Dr Enrico Maraschin attended Wits Medical School from 1981 to 1986, where he was awarded his MBBCh. In 1994, Dr Maraschin further graduated as a qualified paediatrician from The College of Medicine of South Africa.

Dr Maraschin’s first-hand experience as a parent himself has assisted in him understanding and being compassionate towards parents and patients alike. With his own children proving to be the greatest classroom in his studies, his son suffered with severe reflux and poor sleeping habits until the age of six. In addition to this, his son also suffered from sensory integration problems, making Dr Maraschin extremely sensitive and highly aware of the effects that sensory problems have on children and their development.

Prompted by the complexities in sensory problems with his son and other children, Dr Maraschin further investigated the ailment when he began working with Kate Bailey, an occupational therapist, specialising in sensory integration.

Dr Maraschin’s daughter had been born prematurely and suffered too with sensory issues as a result of her stay in ICU. This very personal and traumatising experience, led Dr Maraschin to be acutely aware of the stress and concern of parents that deal with when a child is in the ICU too.

At Dr Maraschin’s core is his wife and two children. A ‘Joburger’ at heart, Dr Maraschin is passionate about his family, bush breaks and the infamous Kruger National Park. A favourite place of his to relax and unwind with his family.

One of Dr Maraschin’s dreams is to establish an outreach programme, which allows him to offer quality healthcare to underprivileged children and parents. In the interim, he is involved in a number of charitable organisations in an attempt to providing medical service and uplifting those who need the support the most.

Dr Maraschin has been involved as a paediatrician for “Just One Child” and “Hearts of Hope”. Both of these organisations offer homes and relief to children living with HIV or orphaned as a result of the disease.

Dr Maraschin is more than a just a child’s doctor; he is focused on your child’s paediatrics prevention rather than treatment, and focuses on providing the best medical service to you and your little one.

Our nursing sister, helps put parents at ease with queries, concerns and feedback all from qualified, well-informed individuals. This feedback does not take the place of consultation, but rather provides parents with enough information to attend to a minor concern or manage their child’s health and well-being until such time that they are able to consult with the doctor.

Our highly skilled nursing sister, runs a full immunisation clinic which is available at our practice. Our practice does not obtain government stock, hence, vaccinations and immunisations are charged for but there is no charge for the administration of the vaccine by the nursing sister.

Sr Bronwen is a registered nurse and midwife with many years experience and vast knowledge in vaccinations.