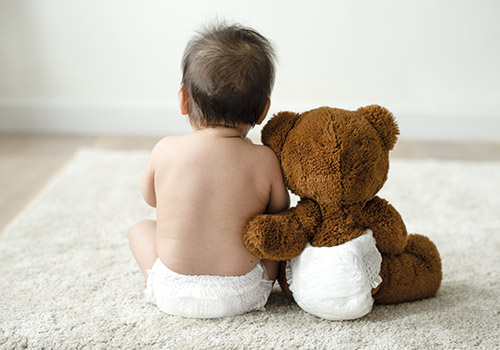 Deciding on nappies- cloth versus disposable

They say that if you keep an item of clothing in your cupboard for long enough, it is bound to come back into fashion. Recently I noticed a number of babies coming into my practice with their bottoms clad in colourful cloth nappies. They are certainly a far cry from the bulky, terry nappies of years gone by but it would seem that cloth nappies are definitely coming back into fashion. The question is which one is best?

From my research it would appear that a case can be made for both. One would need to consider which makes the most sense to you in terms of your lifestyle, environmental concerns, cost constraints and time. The medical fraternity hasn’t had too much to say about this quandary but I did come across some interesting medical data that is worth adding to the debate.

What is the effect on the environment?

When chatting to the parents in my practice it would appear that this is the number one motivating factor for reverting to cloth nappies. However, cloth nappies do also have an impact on the environment. Let’s take a look

-Cloth nappies do not pose the same landfill issue if they are repurposed, passed on or placed in the compost as long as the plastic clips have been removed.

On the flipside, a UK Environmental study found that 560kg’s of methane is produced by a baby in cloth nappies in the first two and a half years.

-Cotton nappies, as their name suggests rely on a crop which requires a lot of pesticides, fertilizers and water to get a yield. These nappies do need to be washed at 60⁰C to kill off any harmful bugs. In many cases parents resort to tumble drying nappies. The washing process is then contributing to larger carbon emissions. Obviously washing involves water, electricity and detergents. These factors also place a burden on natural resources.

What about the cost?

A baby generally uses six to eight nappies a day. This will probably amount to about 10 000 nappies before your baby is potty trained. At current prices it is estimated that disposable nappies will probably cost you around R30 000 versus R15 000 for the cloth nappies in a 30 month period. Obviously if you are able to pass the cloth nappies on to your next child they become even more economical.

Cloth nappies will however require a much bigger outlay initially because you will probably start with around 24 nappies. This is so that you don’t have to wash every day.

Time is also a cost factor for many parents. Making time for washing cloth nappies during a busy work day may seem daunting.

I have heard that disposable nappies contain chemicals. Should I be concerned?

Those in the disposable nappy industry have however, done extensive research into the products and assure users that they are safe. One such study categorically states “The majority of the diaper materials are polymers that are safe and do not have inherent toxicity issues. Trace amounts of non-polymeric materials, such as colorants, are assessed based on their skin contact potential. New materials or design features are introduced in marketed products only if they have been shown to be safe under the conditions of recommended or foreseeable use.”

The major concern with these chemicals is that they may cause skin rashes or be absorbed by the baby’s skin and thereby cause harm.

What does the medical fraternity recommend?

In 1949 the Journal of Paediatrics published an article in which medical conditions arising from nappies were considered. At this time cloth nappies were definitely the order of the day. The conditions included intertrigo (infection in the creases of the groin), diaper rash, ammoniacal dermatitis and urinary tract infections. Out of this study came the recommendation for nappies that met 11 criteria. These included comfort, convenience, cost and good absorptive ability. Industry sprang into action to meet these requirements and the disposable nappy was born.

Current studies have considered the medical impact of both cloth and disposable nappies. These include:

Disposable nappies do definitely contribute to the problem of waste management. In South Africa 1.1 million tons are thrown away each year and those that are not discarded properly are posing a risk to our river systems. Pick-it-up announced last year that Johannesburg’s landfills were reaching capacity.  In South Africa 80% of children currently wear disposable nappies meaning that the environmental issue should become a driving factor for reducing the use of disposable nappies. On the other hand convenience, time and other environmental factors still make disposable nappies attractive. If your child does have recurrent, difficult to treat nappy rash then finding an alternative nappy is important. In all probability a combination of day time cloth nappies and disposable nappies, which are less likely to leak at night, may prove to be the most popular choice for parents.

PrevPreviousEpilepsy- understanding the condition for the good of our children
NextVomiting and diarrhoea in children & babies: causes, symptoms and treatmentNext